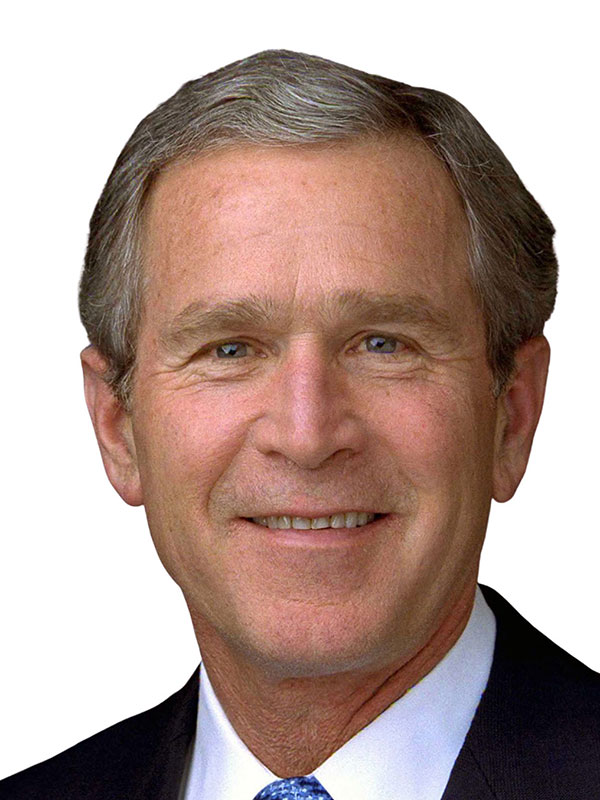 00:00:00
-
00:00:56
Thank you all. Thanks for coming. Thank you for the invite. Thank you, Carl. I'm glad you got a taste of Mother. [Laughter] I was going to start off tonight telling some self-deprecating jokes. [Laughter] But then I couldn't think of any mistakes I had made to be self-deprecating about. [Laughter] In my recent press conference, John Dickerson of Time Magazine asked the question about what I considered my biggest mistake.
Analysis

00:00:56
-
00:02:00
It's an excellent question that totally stumped me. [Laughter] I guess looking at it practically, my biggest mistake was calling on John. [Laughter] Or take that one about Cheney and me answering questions together. That was a toughie. [Laughter] So from now on, Dick and I will be holding joint press conferences. [Laughter] We could do it that way, or we could do it this way: You could ask the question, then I could tell Bob Woodward—[Laughter]—and he could tell you. [Laughter] I thought about giving an economics speech tonight.
Analysis

00:02:00
-
00:02:48
It really gets me when the critics say I haven't done enough for the economy. I mean, look what I've done for the book publishing industry. [Laughter] You've heard some of the titles: "Big Lies;" "The Lies of George W. Bush;" "The Lies and the Lying Liars Who Tell Them." [Laughter] I'd like to tell you I've read each of these books, but that would be a lie. [Laughter] Laura and I always look forward to this event because of the good spirit that brings us together.
Analysis

00:02:48
-
00:03:34
And I appreciate that, Carl, you reflecting that spirit tonight. This year, we are also mindful that our country is in a period of testing and sacrifice. As I speak, men and women in uniform are taking great risks, and so are many journalists who are being faithful to their own sense of duty. When we think of the great war journalists, we often think of an earlier era: Edward R. Murrow reporting from wartime London; Joe Rosenthal with his camera at Iwo Jima; or Ernie Pyle, sending columns home from Europe and the Pacific and dying with the men whose stories he told.
Analysis

00:03:34
-
00:04:05
In every field in every generation, we tend to view the best as belonging to the past. Yet, in our time, that's not right or fair. Many of us were privileged to know Michael Kelly and to read his clear words and to feel the moral conviction behind them. David Bloom passed through our midst with incredible energy, enthusiasm, and tenacity in getting the story.
Analysis

00:04:05
-
00:04:45
Others, like Michael Weisskopf, have shown incredible presence of mind and courage that won our admiration. This generation of wartime journalists has done fine work and much more, and they will be remembered long after the first draft of history is completed. The same is true of our military. We are nearing important days of remembrance.
Analysis

00:04:45
-
00:05:26
Soon, we will mark the 60th anniversary of D-day, in the company of men who have lived long and can tell you the names of the boys who did not. Later this month, we will dedicate the World War II Memorial here in Washington and look back on a generation that saved the liberty of the world. These events will have an added meaning because America is again asking for courage and sacrifice.
Analysis

00:05:26
-
00:06:04
As we honor veterans who are leaving us, we also honor qualities that remain. The generation of World War II can be certain of this: When they are gone, we will still have their kind wearing the uniform of the United States of America. The loss of Army Corporal Pat Tillman last week in Afghanistan brought home the sorrow that comes with every loss and reminds us of the character of the men and women who serve on our behalf.
Analysis

00:06:04
-
00:06:30
Friends say that this young man saw the images of September the 11th, and seeing that evil, he felt called to defend America. He set aside a career in athletics and many things the world counts important, wealth and security and the acclaim of the crowds. He chose instead the rigors of Ranger training and the fellowship of soldiers and the hard duty in Afghanistan and Iraq.
Analysis

00:06:30
-
00:06:59
Corporal Tillman asked for no special attention. He was modest because he knew there were many like him, making their own sacrifices. They fill the ranks of the Armed Forces. Every day, somewhere, they do brave and good things without notice. Their courage is usually seen only by their comrades, by those who long to be free, and by the enemy.
Analysis

00:06:59
-
00:07:22
They're willing to give up their lives, and when one is lost, a whole world of hopes and possibilities is lost with them. This evening, we think of the families who grieve and the families that wait on a loved one's safe return. We count ourselves lucky that this new generation of Americans is as brave and decent as any before it.
Analysis

00:07:22
-
00:07:49
And we honor with pride and wonder the men and women who carry the flag and the cause of the United States. May God bless them, and may God continue to bless the United States of America.
Analysis