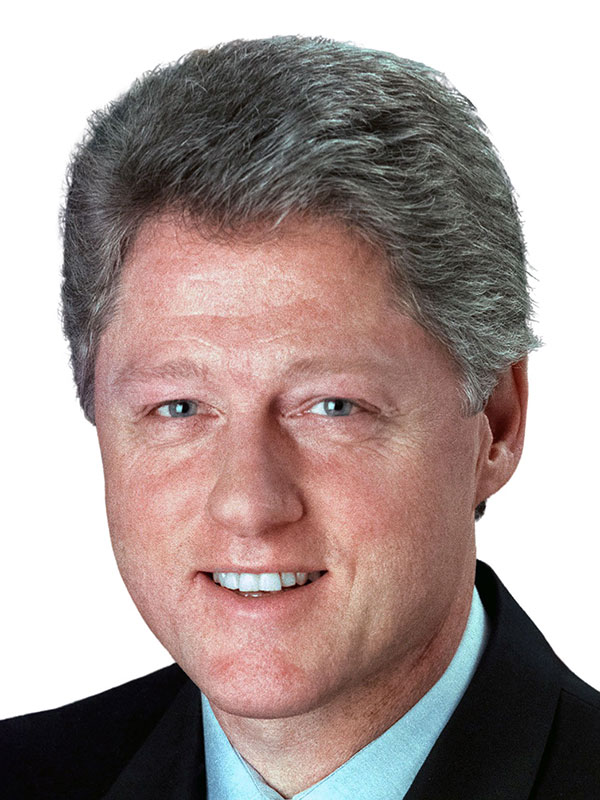 00:00:00
-
00:01:11
Thank you very much. Mr. Hunt, thank you so much for reading the notes that I wrote you. [Laughter] Just like every other journalist, you make all my memos public. [Laughter] To Larry McQuillan, Arlene Dillon, Jon Stewart, who will make us glad we came in a few moments, to all the distinguished head table guests, and ladies and gentlemen.
Analysis

00:01:11
-
00:02:15
I tried to fulfill Terry Hunt's agenda as President. Those are real notes I wrote him. And I will try to fulfill Larry's agenda. I think it's terrible the conditions in which the White House press corps labor. It really is. It reminds me of Nurse Cratchet's office in One Flew Over the Cuckoo's Nest. [Laughter] And it's really a tribute to the futility of a politician pandering to the press, because that used to be an indoor swimming pool that brought joy to FDR and JFK and presidents in between. Richard Nixon gave it to you. [Laughter] And he got such press in return. [Laughter] Maybe this is his final revenge -- the miserable conditions of it. We could uncover it but let you keep it. [Laughter] I could build a cabana. Well, you think about it.
Analysis

00:02:15
-
00:03:22
Before I get into my jokes, I have some important, serious news. [Laughter] Senator Lott and I have broken the gridlock over the budget. A deal now appears imminent. Miraculously, the $56 billion -- [Applause] -- thank you -- the $56 billion gap that has separated Democrats and Republicans has been bridged. And, ladies and gentlemen, we owe Senator Dole a huge debt of gratitude. [Applause, Laughter] And the best part is, we don't have to start paying it back until 2005. [Laughter] And that's outside the budget window. Bigger tax cuts, more money for the Justice Department, whatever -- just sign up, you can have it. [Laughter]
Analysis

00:03:44
-
00:04:24
I want to congratulate awardees tonight -- Byron Akoheda [Ph], who has come from so far away and did such good work; and then there are the local winners, Ron Fournier, Mara Liasson, Todd Purdum. Of course, I'm not familiar with any of your work, but I'm sure it's very good. [Applause] But this Purdum guy's name sounds familiar -- Purdum, Purdum, I think I read it in the engagement announcements recently. Hillary and I congratulate Todd and Dee Dee on their marriage next month. [Applause]
Analysis

00:04:24
-
00:04:42
You know, Dee Dee and I started together on a little plane in New Hampshire, and we made it all the way to the White House. Then she sort of strayed over to your side for a while and I was kind of disappointed. Now she's getting on a 747, going to Beverly Hills. They grow up so fast, don't they? [Laughter]
Analysis

00:04:42
-
00:05:17
Oh, I got another serious thing I want to talk about. Something that I know -- really, you all are on me about all the time. Many of you are distressed that you're not notified in a timely fashion about breaking news, like my knee breaking. And that's valid, and I've been doing some work to make sure it never happens again. In fact, in the spirit of reinventing government that the Vice President has so indoctrinated me with, starting tonight we have decided to give you advance notice of upcoming mishaps. [Laughter]
Analysis

00:05:17
-
00:06:06
Mike McCurry has asked me to inform you of the following. While engaging in some volunteer work tomorrow in Philadelphia, I will be on the receiving end of a painful encounter with a ball-peen hammer. [Laughter] And I will do my best to do it before your filing deadline at 5:00. On May 22nd, I will be visiting the home of Tiger Woods to celebrate his recent victory in the Masters. Please be advised: There is a loose brick on the patio. [Laughter] On July 8, during the fifth inning of the All Star game in Cleveland, I will attempt to catch a foul ball from Rafael Palmeiro. Stay tuned. [Laughter] Look, Mark Knoller is running out to call his editor right now. [Laughter]
Analysis

00:06:06
-
00:06:37
I know we're here to honor you tonight because of the work you do, but this dinner is a pittance compared to the testament to your profession last week which opened its doors, called the Newseum -- the Newseum, the Newseum. [Applause] What really surprised me, for any event in Washington, this opening actually got a lot of favorable press coverage. [Laughter] Evidently, you journalists have a lot of friends in the media. [Laughter]
Analysis

00:06:37
-
00:07:05
But there are a bunch of exhibits I'm dying to see. I want to see the Portrait Gallery of Unnamed Sources. [Applause, Laughter] The Gergen and Shields Retrospective. [Laughter] The museum's crown jewel, the Hall of Pundits. [Laughter] Modeled after the Hall of Presidents at Disney Land, it features mechanized mannequins mouthing contentious blather. No wait -- that's the McLaughlin Group. [Applause, Laughter]
Analysis

00:07:05
-
00:07:47
There is also an absolutely amazing collection of historical artifacts: CSPAN's gavel-to-gavel etchings of the Constitutional Convention; CNN's very first Cross-Fire -- from the left Alexander Hamilton, from the right Aaron Burr, topic gun control. [Laughter] There is an actual press corps travel manifest from Stage Coach One. Guess what -- the film they showed was Fargo. [Laughter] The 30 people in the White House press corps are laughing at that. [Applause]
Analysis

00:07:47
-
00:08:30
There are artifacts of contemporary Washington journalism as well. There is the stack of Bibles upon which Joe Klein swore. [Laughter] There is Johnny Apple's expense reports. [Laughter] A transcript of Ann Rice's interview with Bob Novak. [Laughter] The contract where Bob Woodward insists on Robert Redford being cast as him. [Laughter] There is a haunting photograph from the 1961 White House Correspondents Dinner of young Brian Williams shaking hands adoringly with Chet Huntley.
Analysis

00:08:30
-
00:08:43
And then there is a whole wing dedicated to historic scoops. For example, did you know that Helen Thomas broke the story about the Lincoln Bedroom -- while Lincoln was still sleeping in it.
Analysis

00:08:43
-
00:10:02
However, the most important part of the museum is an exhibit with poses an utterly fascinating question, both contemporary and historical: How would current White House correspondents and columnists have covered past presidential administrations? Have you seen this? I mean, this is an incredible thing. In the exhibit, everyone in the current press corps is making fun of Millard Fillmore's name -- that's everyone except Wolf Blitzer. [Laughter] David Letterman keeps calling William Howard Taft "Tubby" and Teddy Roosevelt "Old Four Eyes." [Laughter] Maureen Dowd writes a column dismissing the first presidential election as politics as usual. [Applause, Laughter] Sam Donaldson makes fun of George Washington's wooden teeth but completely ignores the obvious fact that he's wearing a wig. [Applause, Laughter]
Analysis

00:10:02
-
00:10:38
The New York Times calls for a special counsel to look into George Washington's winning campaign in the Revolutionary War -- because Lafayette was French. And Barbara Walters asks the Father of our Country, if you could chop down a tree -- any tree at all -- what kind of tree would it be? [Laughter]
Analysis

00:10:38
-
00:11:06
All right, now we're going to tell some stuff on us. I know you give me grief from time to time, but really we work around the clock trying to help you do your job. I mean, really, what other administration would make thousands and thousands of internal memos and official documents available for your daily enjoyment? [Laughter]
Analysis

00:11:06
-
00:11:32
But you did miss a couple of good stories. Roll it in, boys, come here. Where are they? Where are my documents? [Laughter] Come here. I hope no one is in contempt for ignoring these. This is just a representative sample. You'll have them all tomorrow. [Laughter]
Analysis

00:11:46
-
00:12:10
Here's a copy of a check we mistakenly thought was a small campaign contribution from AT&T. It turns out that by cashing it we authorized a switch in our long distance service. [Laughter]
Analysis

00:12:10
-
00:12:33
Here's a memo outlining the DNC's high donor program. It's pretty embarrassing. Business class upgrades for Air Force One. Mr. Speaker, it could have been you. [Laughter]
Analysis

00:12:56
-
00:13:19
And this is the most embarrassing one of all, from the White House visitor log last year. I can't believe any of you missed this. It seems that during the period of time when the First Lady was recording her Grammy Award winning album Milli Vanilli came to the White House 32 times. [Laughter]
Analysis

00:13:19
-
00:13:53
Now, I don't know how this got in here. This is a letter of acceptance to Chelsea, saying that she will -- from Chelsea, saying that she will attend -- no, that's privileged. [Laughter] But, look, the bad news is, our only child is going off to college. The good news is, it opens up another bedroom. [Applause, Laughter]
Analysis

00:13:59
-
00:14:25
Now, we know how important technology is to our future, and the White House has always been the center of new technological developments, ever since John Adams occupied it. There was the electric lights, the telephone, the telegraph, the tape recorder -- [Laughter] -- and the Clapper -- [Laughter] -- and, most recently, the computer.
Analysis

00:14:25
-
00:15:11
Now, just last week the Vice President and I used a computer in the Oval Office. I felt like a kid who first got to drive; he actually let me do some things on it. [Laughter] And it's clear that we are once again at the threshold of a new era that will forever change the way presidents conduct matters at home and abroad. As of this week, I have been working around the clock trying to balance the budget with Quicken. [Laughter] And I want you to consider this. In the post-Cold War era, the introduction of the computer has raised a profound question: Whose finger do you want on the control-alt-delete button? [Laughter]
Analysis

00:16:25
-
00:16:59
I'll never forget how I found about this incredible device, search and replace. I walked into the Vice President's office not very long ago and he was there working on his computer -- F2; search for Bill Clinton -- [Applause, Laughter] I got there just in time.
Analysis

00:16:59
-
00:17:12
James Thurber said that humor is one of our greatest and earliest national resources that has to be preserved at all cost. Well, I hope we've saved a little up tonight and enriched it.
Analysis

00:17:12
-
00:17:25
I thank you and come here to honor your indispensable part in our lively 225-year-old experiment in democracy. May we work together so that it continues to light and lead the world.
Analysis

00:17:25
-
00:18:46
Tomorrow I'm going to Philadelphia, where this great experiment began, to open the President's Summit for America's Future. We'll gather there to renew the spirit of service that built this country. Each of us must serve -- you in your way, me in mine. You can start right now -- by busing your own tables and helping with the dishes. [Laughter] Now, when Jon finishes, I'm going home.
Analysis