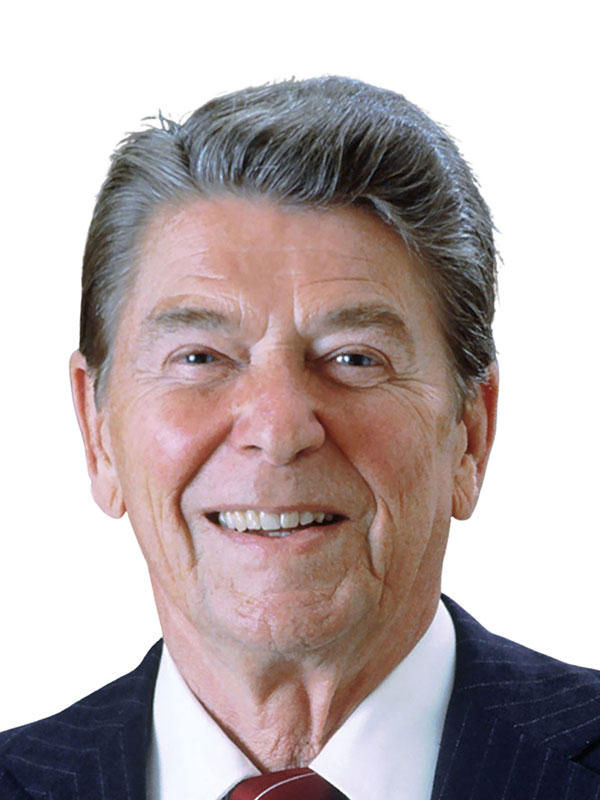 00:00:00
-
00:00:18
Well -- [Laughter] —let's get one thing over with right away. I know all of you are uptight—asking yourselves, "Is he going to say anything about Fritz Mondale?" Well, Fritz'll do all right. If he doesn't get the nomination, he can always do perfume commercials—"Promise them anything but give them Arpege." [Laughter] I hope you'll forgive me—look, if some of these aren't funny.
Analysis

00:00:18
-
00:01:13
I asked Congress—they only gave me a third of all the ones I asked for. [Laughter] But I hope you'll forgive me if I say that I'm filled with mixed emotions. I didn't know there were so many of you that couldn't get tickets to the Gridiron. [Laughter] And I appreciate your inviting me, but I do get a little nervous at a ceremony where the new president is replacing the old one. [Laughter] Incidentally, I know that some of you-you talk a little bit, and you're critical about what you say is my "living in the past." But I think that's because a lot of you don't just realize how good the old days were.
Analysis

00:01:13
-
00:01:57
You know, then you looked forward to seeing Lana Turner in a sweater, not Dan Rather. [Laughter] But you all have given me some problems at home. Nancy's taken to watching the press conferences, and now every time I answer a question, she says, "I have a followup." [Laughter] And I hear that Lesley Stahl has been asking if anything can be done to improve my answers.
Analysis

00:01:57
-
00:02:56
Yes, ask better questions. [Laughter] But do you know what it's like to have Chris Wallace and Bill Plante screaming questions in your ear when you're only about 10 feet from the helicopter with the motor roaring, and you realize they're asking, "What's wrong with your hearing, Mr. President?" [Laughter] The other day the Washington Post ran a story heralding the return of spring, and I thought it was just another one of the reports on the political campaign.
Analysis

00:02:56
-
00:04:06
The headlines said, "The Sap Is Running Again." [Laughter] You know, I think it's interesting—your new president's been out covering Gary Hart, and I understand that he's come up with yet another new idea about the future: Avoid Roger Mudd. [Laughter] Every time he thinks about that interview, Ted Kennedy's entire life flashes before his eyes. [Laughter] He got so rattled with some of Roger's questions that he gave his right age. [Laughter] And of course, about that name thing—the other day he said that the name, as far as he knows, goes as far back as the Revolutionary War.
Analysis

00:04:06
-
00:04:32
Well, I wouldn't know about that far back, but I do feel that I remember running across somebody by the name of Hartpence at San Juan Hill. [Laughter] You guys and gals are ,always trying to pin me down as to which candidate worries me the most—Mondale, Hart, or Jackson. None of those. The guy that scares me is Governor Dick Lamm. [Laughter] But I've been enjoying this, and yet sometimes I find myself thinking about what it would be like to have a steady job with real job security, like managing the New York Yankees for George Steinbrenner. [Laughter] You've got to be a baseball fan to get that one. [Laughter] They're in and out in 3 weeks.
Analysis

00:04:32
-
00:05:25
If I could just switch for a minute, I'd like to say how great it was to see and hear the great talent of Rich Little. I was a little disappointed tonight, because you should really see him when he impersonates Gary Hart imitating Jack Kennedy. [Laughter] I'd like to have him come up with an imitation of a balanced budget. [Laughter] But, you know, I just don't understand those guys that are bellyaching about the economy and trying to make out that everything is so bad.
Analysis

00:05:25
-
00:06:33
Inflation is down. Taxes are down. Unemployment is down. Productivity is up. So, what's the beef?. [Laughter] And what's all that talk about a breakdown of White House communications? How come nobody told me? [Laughter] Well, I know this: I've laid down the law, though, to everyone there from now on about anything that happens, that no matter what time it is, wake me, even if it's in the middle of a Cabinet meeting. [Laughter] Another thing that needs taking care of are the leaks.
Analysis

00:06:33
-
00:06:55
And we're really going to get ahold of those. Already I have ordered that we get rid of all those White House memo pads that have a notation on the bottom of each page that says, "Courtesy copy: Lou Cannon, Steve Weisman." [Laughter] And by the way, why are you all so willing to carry the bad news about the administration?
Analysis

00:06:55
-
00:07:23
Now, you all did stories about the Vice President taking a dive at the bowling alley, but no one mentioned that he knocked down nine pins. [Laughter] And if he had slid just a little further, he'd have caught the 10th one with his head. [Laughter] "Bowling for Dollars" wants him to do a guestspot. [Laughter] There's just one last thing, and that's those stories—and then I'm through—about Tip O'Neill and me and as if we're having some kind of a fight or feuding.
Analysis

00:07:23
-
00:07:47
That's nonsense. Tip is really crazy about me. Just this morning he sent me a whole case of Girl Scout cookies. [Laughter] And he put in the cutest note. He said, "They taste better if you eat them with your eyes shut." [Laughter] Well, thank you, thank you all for inviting us to be here tonight. You know, the American people need you, and they need the truth.
Analysis

00:07:47
-
00:08:09
And your challenge is to report the truth about America and about those societies where the truth is despised. And if the truth is served, then America is served, and we'll all remain free. And, again, it's been a wonderful evening, and thank you, and God bless you.
Analysis